Train anywhere: your hoteL room the gym, by the pool and also by the lake!

Try our 5-day protocols that work on defined objectives to hit scores during your vacation: abdominals, buttocks, legs, full body

Try our SUMMER CHALLENGE: 15 minutes of training each day!

The access is 100% free. You are just one step away from a new way to stay fit during your vacation..

INSERT YOUR EMAIL IN THE UNDER FORM AND LET’S START!

Bright & Fit is the first online Holistic Fitness program with MEDICAL CERTIFICATION in Italy. It has a modern and technological APP downloadable from the Apple and Google store that allows you to control each aspect of the program within a few simple clicks

Nutrition. B&F promotes health teaching how to eat. We don't promote the use of artificial substances or crazy diets. You will find more than 500 recipes that cover your daily routine

Mindset. B&F is not just an ONLINE fitness program. It is a personal transformation tool that aims to help women redisign the perception of their limits through home fitness trainings, mindset excercise and nutritional advice to regain self-esteem and a better quality of life. 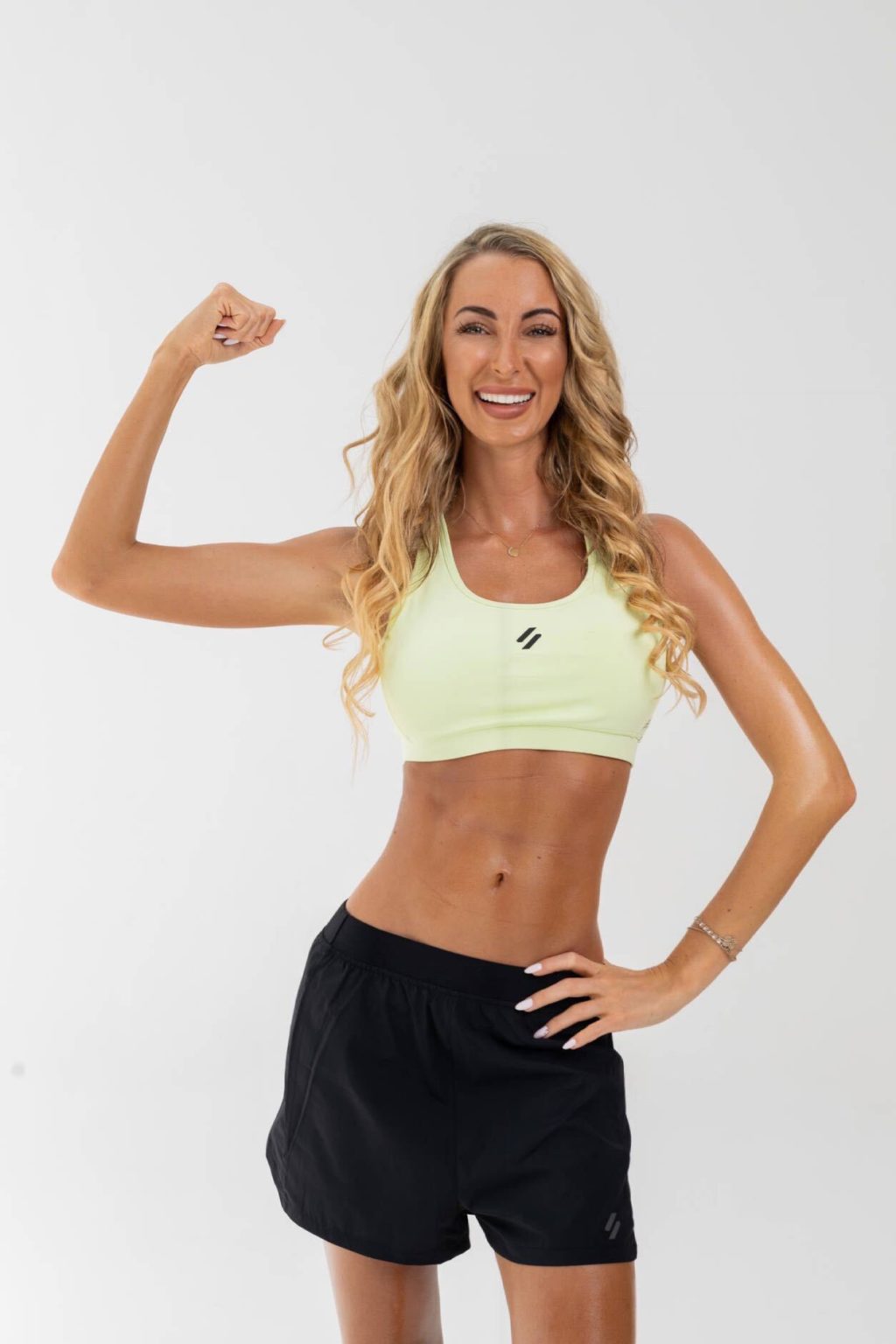 Check your email. You will receive the LOGIN and PASSWORD to get a free 7 days access to our program

Alice Veglio is considered one of the most prominent international personal trainers and women empowerment activist in Italy and internationally. In addition she has walked down the catwalk at the most important fashion shows and posed all over the world for brands and photographers in prestigious locations such as Paris, Dubai, Rome, Maldives and Qatar just to give some examples. Her face is known for having presented important events broadcasted nationwide in Italy, having appeared in some of the most famous fashion weeks in the world and in numerous advertising campaigns and music videos including that of The Kolors and Shade in 2018.

From an early age, Alice started to pose for fashion brands for kids and at the age of 15 she had her model debut in her first fashion show for Vogue. Her CV also includes the role of poster girl for Juventus and Moto GP, until 2014 when she had access to the Miss Italy final, in 2016 won second place at Miss International Model, in 2017 again second at Miss Europe and in the same year Alice won the title of Miss Earth Italy Air in 2017.

Very followed on the web, in 2016 she began a career as a blogger and influencer boasting today over 210,000 followers.

Alice was project assistant and then sustainabilist journalist for the government office Dubai Carbon Center of Excellence. She had also the charge of junior project manager for WGEO at United Nations Office.

In 2018 she launched her Fitness Program counting over 30.000 members in Italy and worldwide just on the first year alone. Alice on her content not only shares high quality certified information about fitness and health, but she is also fighting hard to empower as many women as possible to reach their own potential. This mission takes his roots in Alice’s childhood when she was diagnosed with a serious and dangerous spinal disease. This ambitious project called “Bright & Fit Fitness Program” strives to bring to Italy an innovative concept of digital wellness and women empowerment with the first 100% italian fitness program application available on the major stores Apple and Android.

Alice today is a demanded motivational speaker in women empowerment events, a successful entrepreneur and fitness coach well known for innovating the fitness field and an international athlete taking part to fitness events and Ironman races. 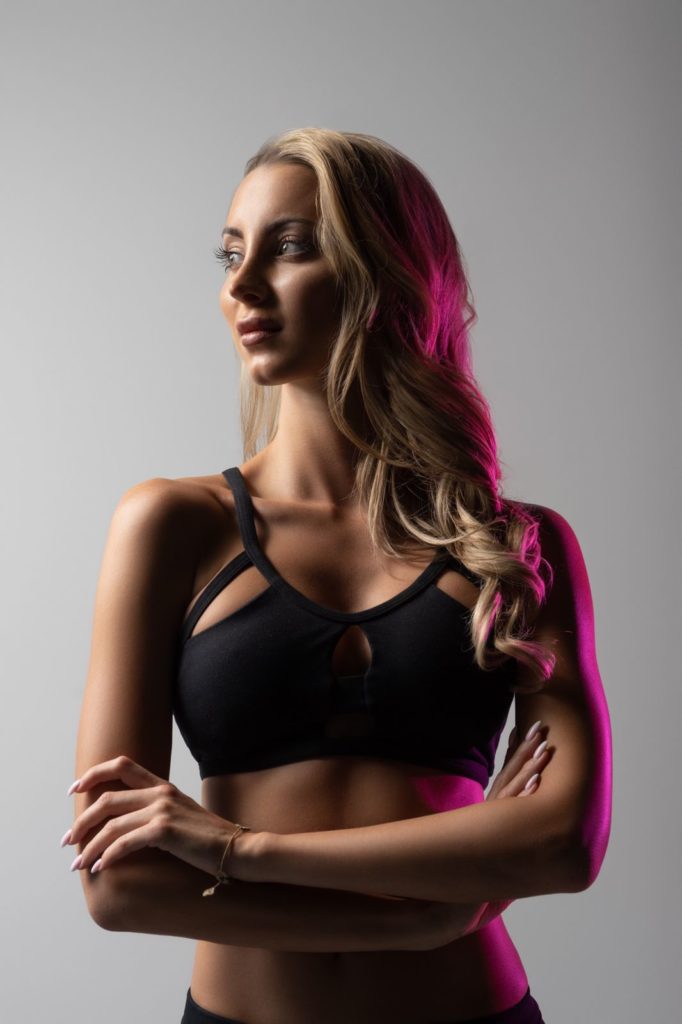 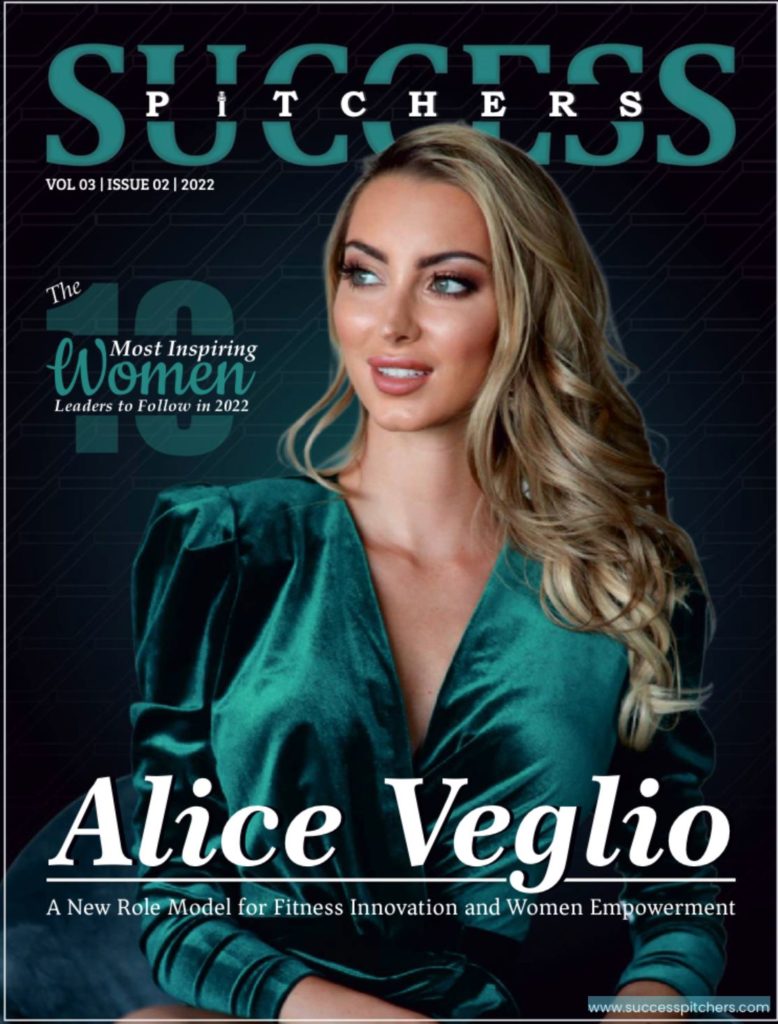 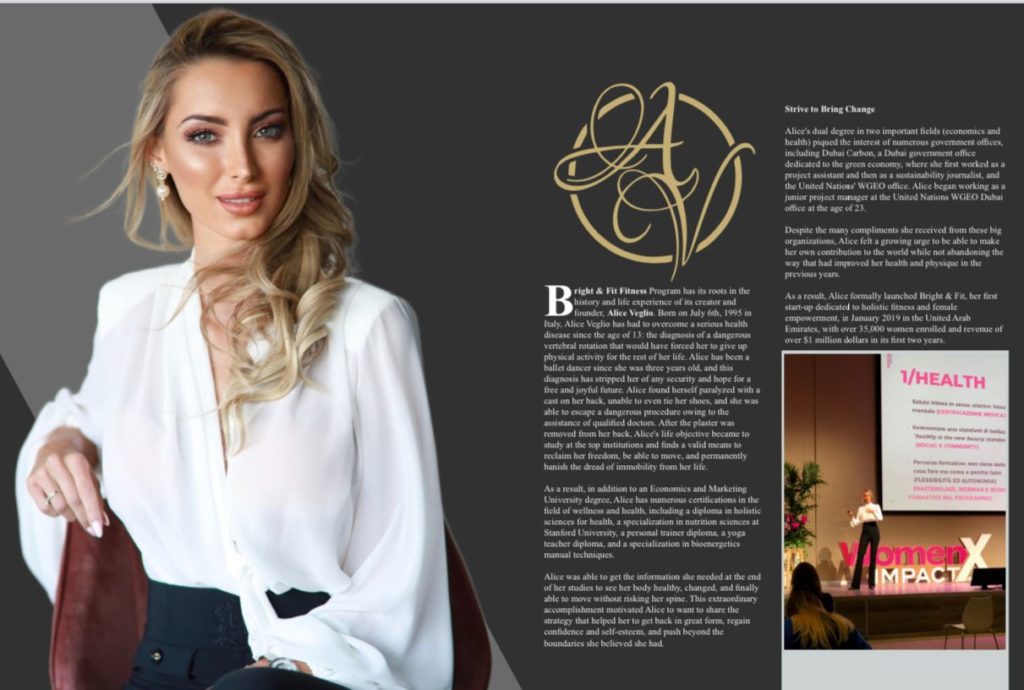